Next day it was time to climb ! It’s been a while since I properly moved my rusty bones, and was already feeling the pain and misery coming.

I am not much of a boulderer, not to mention that we didn’t have crash pads on us, so we decided that sport climbing is the way to go, and that’s – Owen’s River Gorge in Bishop.

The climbing is all located in this super cool deep river gorge (as the name indicates), so to get to the climbing, one has to walk down steep paths leading to the floor of the gorge. When you get down to the river, it’s like you just descended into some lost world – golden walls on both sides of the gentle river, cozy trees and lots of warmth. And barely no people! How can something so magnificent and popular be so empty? 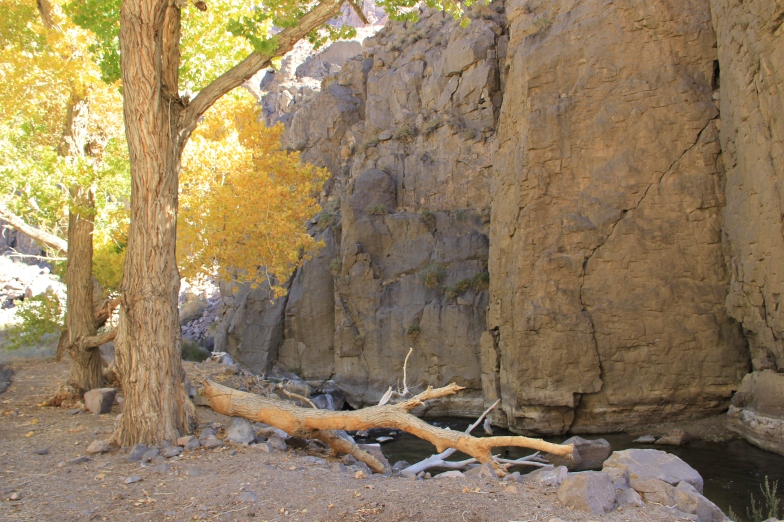 As we didn’t have a guide book for the area, we asked a group of three we met for suggestions, and got pointed to a cluster of 5.10s and low 11s a bit down the river. Climbing was great fun! I am forgetting more specific rock feature details, but climbing was balancy and technical – the type I really enjoy. 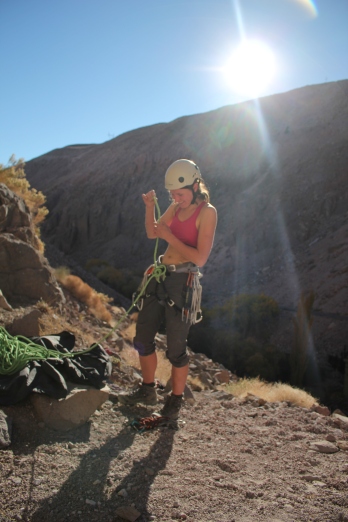 I did have some issues with bolting though… Quite a few climbs we did, the second bolt was so far from the first one that would have certainly decked, if falling before clipping that one.

One climb I got onto was rather crazy though ! It was not hard – maybe a 5.10c or so, but 10 meters above the ground, 1-2m since my last clip, the bolting just ended ! The next bolt being another 6-7 m away! Yes it was easier stretch of climbing, maybe around 5.9-5.10a, but the rock was not the best quality, and section just before the clip looked tricky. There was a rusty old peg right next to me, so probably someone had the same thought I did. After a few minutes of contemplation hanging on the hold I was on, I decided to down climb. I was not in the mindset to risk my life over a silly sports climb … Unfortunately the days are short in late autumn, and we had to pack up an retreat back to our car.

Published by Kris A

Mountain runner, climber, adventurer. View all posts by Kris A

Where I’m off to